In the first (and a little bit longer) part of this blog (if you missed it, read it here) I described the standard bundle of 2Ring GADGETS for Cisco Finesse. Part 2 will focus on two solutions that are added in the ENHANCED bundle: 2Ring DASHBOARDS & WALLBOARDS and 2Ring SCRIPTS & FORMS.

1. 2Ring DASHBOARDS & WALLBOARDS
A client-server solution that empowers supervisors to control content displayed on plasma screens in Cisco Contact Centers (Express or Enterprise) or on any Windows-based machine. I say "content" because in addition to displaying any of the out-of-the-box KPIs (Key Performance Indicators) or any KPIs that your MS SQL engineers build, you can also display other content - a message ticker (marque), web reports, pictures, PowerPoint slides, flash videos or flash apps. 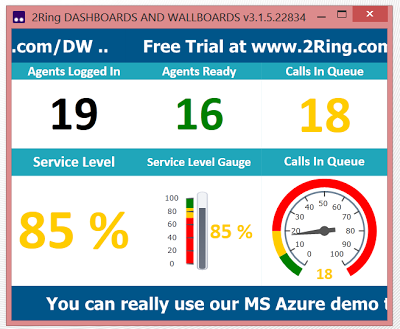 The solution comes with a neat web-based configuration tool that includes an intuitive slicer allowing supervisors to easily build new or modify any of the existing layouts, modify thresholds on existing KPIs, and change any visual aspect of the layouts. 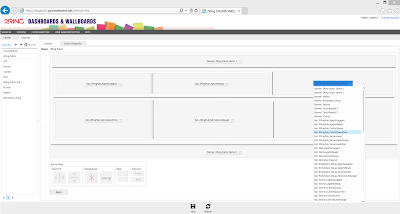 A free trial will allow you to download a 2Ring DW Client application that will access data from 2Ring's server in the cloud (MS Azure). Plus, you will obtain access to the web-based configuration tool on the same MS Azure server (the login screen is here), so you will be able to check out all the configuration options and even build a completely new layout to run in the downloaded 2Ring DW Client. It is truly a quick way of testing the solution's user interface before tying it into your existing UCCX or UCCE environment.

A detailed presentation, including a schema that explains how the solution works, can be found here.

2. 2Ring SCRIPTS & FORMS
A web-based solution that Cisco Contact Centers can use in two ways - 1) as a very advanced and flexible wrap-up form (to collect information on which services are provided by agents on every call), and 2) as a scripting tool navigating agents during a call (mostly used for outbound campaigns).

The out-of-the-box wrap-up form options provided by Cisco have their limitations. In Cisco Finesse, the wrap-up form offering has improved a lot (compared to a CTI-OS Toolkit or CAD) since an agent is provided with a new wrap-up form upon a new call. If your needs are basic, then you are OK with the out-of-the-box forms, but if you need to use multiple wrap-up forms with many possible entries and multiple levels, then you should look into 2Ring SCRIPTS & FORMS. Click here for an example of an advanced form. It uses basic checks & balances (if an agent selects something on the 1st level, s/he won't be able to submit the form unless a 2nd-level value is selected as well) and can be built with check boxes, radio buttons, or even blank fields following a tree structure split into multiple columns if needed). 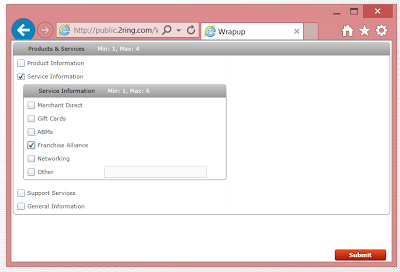 Guiding agents on calls - either inbound or outbound - is another common use for 2Ring SCRIPTS & FORMS. Depending on the customer's answers, the form slowly unfolds along the appropriate branch and offers the agent another level of the script. From the agent's perspective, it is positive that the form allows the agent to input the customer's data directly into the form, so the agent doesn't have to switch to another application or applications during the call. Obviously, it is possible to use multiple forms and scripts at the same time and provide the agent with the appropriate form depending on call variables (driven either by selection in the IVR or the customer's profile or other logic).

Every submitted form/script is stored in a database (MS SQL Server) along with CallID and some other call-related data, so it is then easy to provide advanced reporting either using Cisco Unified Intelligence Center or other reporting tools (such as MS SQL Reporting Services).

Coming back to Cisco Finesse, the forms/scripts can be hosted in a separate gadget or even in a separate tab of the browser in which Cisco Finesse is running, but usually these gadgets run in one of the tabs of 2Ring BROWSER, and agents have a button configured in 2Ring infoPANEL to access the list of other forms/scripts in case the one that was populated automatically is not correct for the current situation.

A detailed presentation, including a schema that explains how the solution works, can be found here.
I don't want to keep this too long, so I will finish here for now, but if you have any questions, please post them below or reach out to me on Twitter.

Last time I wrote about the reporting services of 2Ring PHONE SERVICES (read the blog here), and today I am going to cover Alerting.

As with reporting, Alerting also started with our CLID (Caller Identification) feature. Once we have information about incoming, outgoing, or internal calls, there is no reason why we cannot send notification about these calls. This easy-to-see discovery led to a stream of ideas about what we can do, e.g. monitor long calls or calls to emergency numbers (911, 112) and also provide missed call alerts. Through our discussions, the concept became quite easy to imagine.

In IPPS, 6.3.1., it is possible to create rules that invoke alerts when a device/extension (or a group of devices/extensions) makes/receives a call or when a call is received from or placed to a particular external number (or to a number that is on a list). Such rules can be then limited to call length, business hours, etc.

And what about actions?
When we identified the list of events that could trigger an alert, we started working on identifying what an alert should look like. Should it be a simple text message and image? Another question that needed to be answered was who should be the receiver of these alerts – an administrator, a manager, an internal line "owner"? It was obvious that the answer would be different in each case, and thus, we decided to support it all: sending alerts to specified numbers, email addresses, or groups as well as having the option of sending an announcement to the line owner. The types of notifications/alerts that you can use are wide:

And, as you probably already assume, a rule can be associated with an unlimited number of actions.

And as the cherry on top, you do not need to run actions via rules; instead, you can launch them manually and/or schedule them via the 2Ring PHONE SERVICES internal scheduler, Windows scheduler, and or any other scheduler that is able to target a URL address.

That’s my piece on IPPS Alerts, and next time, I will cover several use cases of how they are used in production.

Until next time, live long and prosper! 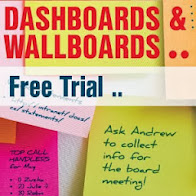 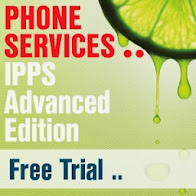 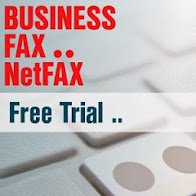 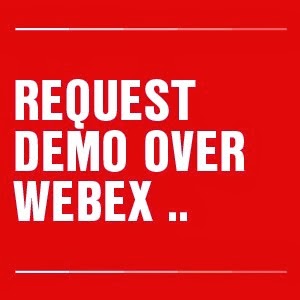